It is just before six in the evening on Sunday 5 August at Land’s End, Britain’s most south-westerly point. A family plays at the landmark signpost while an unassuming cyclist, kitted up for what appears to be quick trip to get some milk, asks a tourist to take a photo. Photo taken, and without any fanfare, the cyclist quietly slips into the evening to attempt something mind-blowing. He won’t sleep for another 33 hours. The cyclist in question is a mild-mannered school teacher from Belgium, Kristof Allegaert. He is not a professional cyclist but to those in the ultra-endurance cycling world he is as close as it comes to a pedalling God. Kristof has dominated every ultra-endurance cycling race he has contested. He doesn’t race across countries, he races across continents. Mainland Europe, Siberia and Australia have all served as stages for his superhuman endurance performances.

Forget the Tour de France, Kristof’s races are solo and unsupported. He has no teammates, no support cars, no massage therapists and no doctors to help him along the way. The rules of these more underground events require Kristof to carry all he needs or buy it or fix it himself along the way. He must find places to catch a few hours sleep, motels at best or a roadside patch of cold dirt at worst, before his relentless push forward. It is just like cycle touring but with a sense of urgency.

When racing Kristof covers more than 400 km every day, without regard to weather or road conditions, for more than a week. He has never been beaten in an unsupported endurance event but still he seeks new challenges. So who does Kristof race when there is no one left to race? Himself.

Kristof set himself the task of riding the iconic touring route from Lands End to John O’Groats and back again faster than anyone before him. The trip covering the furthest distance between two inhabited points on the British mainland is a rite of passage for British endurance athletes and a bucket-list adventure for more conventional cycle-tourists. 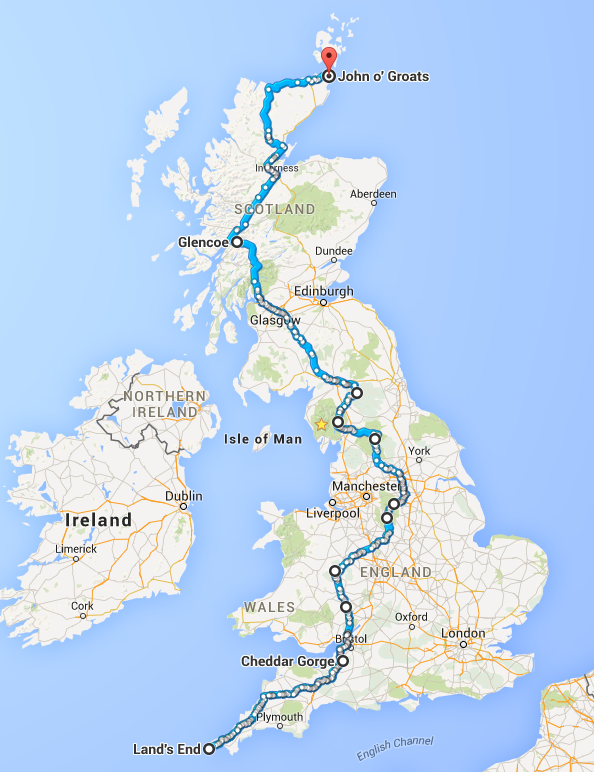 Typically cyclists take 10 - 14 days to complete the journey in one direction, Kristof’s task was to complete an out-and-back journey (known as “LEJOGLE”) in half that time. What made Kristof’s plan more remarkable was that there was no support crew. It was just Kristof, his Curve Cycling Belgie Disc titanium bicycle (that he has codenamed Natascha), and his credit card. No one else. He would look like any other cyclist out there, only those in the know his were aware of his mission. Kristof left Land’s End alone at 6pm on Sunday 5 August and reached John O’Groats in northern Scotland at 1:15 pm on Wednesday later that week after an unsupported journey of about 1,350 km. Kristof’s comment on the effort, “Not bad for a rookie”. After a quick photo to prove his arrival, Kristof did a U-turn and started the journey back to Land’s End. His outbound trip was a wild ride. It was hampered by some early mechanical issues on a dirty highway stretch, unfavourable weather, unplanned detours due to heavy traffic and questionable accommodation. Amazingly Kristof was not deterred. When faced with wet weather and challenging winds in the north of Scotland Kristof reported, “Scotland is wilder in every sense. The conditions are rougher and it’s more desolate. Just how I like it.” To meet his goal, Kristof needed to return to Land’s End before 3:08 pm on Saturday 11 August. He arrived just 16 minutes late, welcomed by the cheers of a single fan. Kristof didn’t seem too fussed about his late arrival. The final 200 km included atrocious weather and the busy A30 highway jammed full of agitated holiday-makers on the first day of their break. Did Kristof push through traffic intent on achieving his goal? No. He stopped for coffee breaks when he thought conditions were too dangerous, after all, he had no support car to shield him. His priority was to arrive safe.

Kristof didn’t carry a tracker for his “holiday ride” and seemed surprised by the attention. He shared occasional photos and updates from the road with a few friends which made some basic reporting possible. These messages and location reports were shared on social media allowing hardened fans to find Kristof on the road and cheer him on, often in the middle of the night. For Kristof though, this mission was nothing special. Endurance cycling has been in his life for so long that it is as natural as breathing. For him it was just another ride. A personal challenge. He let us follow his trip through a few messages and photos along the way. There are plenty of other adventures that are purely private to him - we will never know about them. At the end, there were no autographs and no media commitment. After some food and a quick photo to prove his arrival Kristof thought hard to remember where he parked his car six days earlier, rode back to it, packed up and started his long drive back to Belgium. Alone.

What a supreme effort. Bravo. I did this ride at about the same time but only one way. It took me 24 days to do 2070km on a fully loaded touring bike, the slowest LEJOG in recorded history if I can believe all the stories I heard from others who’d done it, so between us we appear to have bookended the ride nicely. Congratulations once again; I am in awe.

Ah I was wondering how he got to Lands End to start. I was hoping he had ridden to Dunkerque, caught the ferry as a foot passenger then ridden across the south of England. Perhaps next time!